Oscar Romero was born in Ciudad Barrios, a town in the mountainous east of El Salvador, on 15 August 1917. He was the second of seven children. When he was thirteen he declared a vocation to the priesthood. In February 1977, Oscar Romero became Archbishop of San Salvador.

As Archbishop of San Salvador, Father Romero was a source of strength and hope for the poor and for the oppressed of his country, working with and for them, taking their struggles as his own. Romero wrote and spoke passionately and publicly of the need for Christians to work for justice and was frequently faced with threat and danger from those who opposed his ideas. On March 24, 1980, while celebrating the Eucharist, Archbishop Romero was shot and killed at the altar by a death squad assassin, paying the highest price for the commitment about which he spoke so often and so eloquently. Because of his courageous stand for justice, he became a martyr not only for poor Salvadorians but for all struggling to overcome oppression and poverty.

Today, his sermons are read as powerful reminders of Christians' obligation to fight for a just society. Shortly before he was murdered, Romero said: "It is my hope that my blood will be the seed of freedom and the sign that hope will soon be reality" The example of Romero's courageous life and ultimately death continue to inspire those who struggle for human dignity and justice.

"It helps, now and then, to step back and take a long view.
The kingdom is not only beyond our efforts,
it is even beyond our vision.
We accomplish in our lifetime only a tiny fraction
of the magnificent enterprise that is God's work" 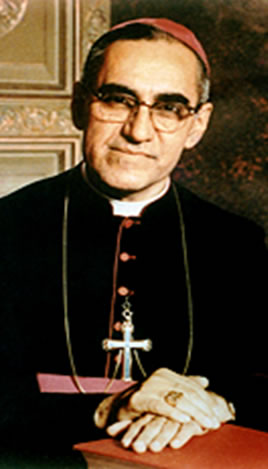