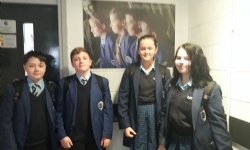 On Wednesday 4th March, our year 8s took part in National Enterprise Day. Throughout the day they developed their own product, brand, logo, marketing strategy, and social media competitions. In the afternoon they then had to showcase their ideas to the rest of the year group on stage. Our three judges couldn't choose just one winner, so they decided to merge two groups together and formed a new team that will compete in the National Finals.

Well done to the winning team for the Year 8 enterprise day. They will now be attending the National finals in July. Their winning idea was to use empty gas containers to build a eco village to house people with its own sewage system.