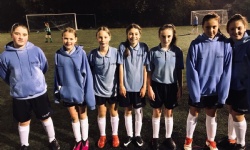 On Thursday 7th November two Yr 7/8 girls teams represented SJP for a second time at Bebington High, but this time hosted by Tranmere Rovers Football Club. The girls yet again were brilliant in representing the school by showing respect and professionalism as they competed against a host of other schools during the night.

SJP A (Jana Gomes, Bella Fowler, Seren Paling, Amelia Milroy, Jess Brady, Leah Ronney & Mary Jane Ronald) were matched alongside Bebington, Wirral Grammar B and Neston A. The girls won all three games without conceding a goal meaning that the girls finished top of the group and progressed to the finals night on Thursday 21st November.

Well done to all of the girls for playing some excellent and hard battled football. We will now look forward to the finals night and wish the best of luck to the girls who will represent the school that night.