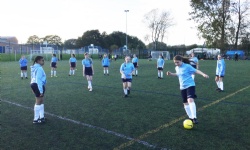 Congratulations to some of the year 7/8 girls who represented the school last in a football tournament at Bebington High last night. The girls played some brilliant football and were excellent in representing the school by showing brilliant behaviour and respect for their opponents. The girls were split into two teams as the first round of fixtures seen both teams play two games before they went on into the next stage of the tournament

SJP A (Clara Gordon, Bella Fowler, Seren Paling, Amelia Milroy, Jess Brady, Leah Ronney & Mary Jane Ronald) were matched alongside Woodchurch and Upton Hall. The girls won one and drew one meaning that girls finished top of the group. In the next round, the girls were matched up against Wirral Grammar and Bebington High. The girls again won one and drew one meaning that SJP A came 1st out of 9 teams.

SJP B (Jana Games, Freya Hamlet, Sinead Daly, Ellie Herbert, Millie Bedford, Ciara Reid, Mollie-Mae Jones) were matched alongside Wirral Grammar and Prenton. The girls lost one and drew one meaning the girls finished second and went through into the middle group. In the next round, the girls drew both games meaning that overall the SJP B finished 5th overall.

The girls next look forward to representing the school again on Thursday 7th Nov in the Tranmere Rovers tournament. Well done Girls.