We are off to the Big Bang Fair for the National Final. 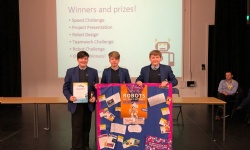 A group of students from St John Plessington Catholic College have been announced as one of the winners of the regional heats at The Big Bang North West.

The team, made up of Luke Chadwick, Cameron Pierce, Ben Weedall, Daniel Larway and Aaron Larway with the project from the group titled ‘Can axolotl (AKA Mexican walking fish) slime fight disease?’. As part of the project, the students have conducted experiments on their own axolotls to see if their slime can fight disease.

The Big Bang Fair is aimed at young people primarily aged 7-19. It will see over 100 experiences, several interactive shows, a STEM playground and careers talks and guidance taking place from 11 to 14 March, with school days on Wednesday to Friday and a public day on Saturday.

In amongst the young talent, viewing their projects and speaking to competitors you will find a host of judges and VIPs, all looking for the next GSK Young Engineer and GSK Young Scientist of the Year. Among the list of industry professionals are the likes of Head Stemette & co-founder of STEMettes Dr Anne-Marie Imafidon, UK Tech Expert, children’s author and television presenter Jason Bradbury,

We are off to the Big Bang Fair for the National Final. Wow!

In We are off to the Big Bang Fair for the National Final.