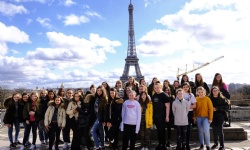 Just before the half term break one hundred and twenty-three of our pupils travelled by coach and ferry to Lésigny near Paris. Everyone was very excited to arrive in France. We arrived at our accommodation ‘Chateau de Grande Romaine’ where we enjoyed settling in and having an evening meal.

On the next day some spent the morning at the chateau taking part in a variety of outdoor activities. Pupils had the chance to try a range of activities including abseiling, climbing, buggy making and archery.

That afternoon some pupils visited ‘Stade de France’ where pupils had a guided tour of the entire stadium including the players and referees changing rooms, the presidents’ suite and even the prison! Others visited the cheese factory where they enjoyed a presentation and samples of various French cheeses and the rest enjoyed ‘Cité de sciences et de l’industrie’ a fully immersive hands-on science museum.

Thursday was also extremely busy, all pupils did a cruise of the river seine and visited Tour Montparnasse, the only skyscraper in Paris, where they took the express elevator up to the 59th floor and took in the incredible views of Paris from the top.

Some followed this by a visit to the spectacular Arc de Triomphe and the busy Champs- Élysées, whilst other pupils chose to tour the beautiful Sacré Coeur and Montmartre. Others visited the Musée d’Orsay and saw famous works by artists such as Monet, Renoir, Van Gough and many more.

On Friday we spent the entire day at Disneyland in Paris visiting both the main Disneyland Park and also Walt Disney Studios.

Evenings were spent learning how to make crêpes, playing football and basketball on the outdoor courts and enjoying a fantastic last night disco.

The trip was a great success where all students were immersed in French culture and took every opportunity to practice their language skills.