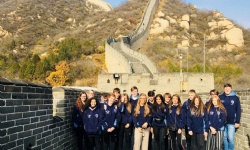 This October, Pupils from St John Plessington Catholic College, accompanied by Mr Jones and Miss Chesters travelled over 5000 miles to Eastern China. The trip was designed so that pupils would act as a delegation from SJP and visit our sister school in the city of Taicang, Taicang Number 2 Middle School.

The pupils flew from Manchester Airport, Via Doha and arrived in Shanghai in the middle of the afternoon, where they were greeted by their tour guide Lin- who has accompanied many a group from SJP before. They then travelled to The Bund, the waterfront of Shanghai, where they were greeted by city skyline views all lit up in the evening darkness, a truly amazing sight. Following this, the pupils sat down to their first Chinese Banquet meal, the first of many amazing culinary experiences for them on the trip, each served with boiled rice and eaten with chop sticks.

The next day pupils visited various places in Shanghai- in order to get a feel for the culture of this city. After a few days exploring Shanghai the group travelled to Taicang, a city about an hour’s drive from Shanghai. It was here that the pupils visited our Sister school, Taicang Number 2 Middle School. The group were greeted with cheers and applause by the Principle, Senior Leaders and pupils from the school who gave them a very warm welcome.

The pupils then experienced different lessons at the school, including Beijing Opera, traditional Chinese calligraphy painting and sport and exercise classes. The lessons were very different to anything to group had experienced before, it came as a culture shock to learn that school started at 7am and the day concluded around 12 hours later. They also visited the sister school of St Marys Catholic College, another school in Taicang, Loudoux Middle School. Here all pupils released their inner artist, in a traditional Chinese fan painting class. The group got very competitive about the aesthetic quality of their fans, especially the staff members. The pupils also took part in an exercise drill, all pupils lined up in the sun doing various exercises to the sound of a whistle, definitely a culture shock for our pupils, that some adapted to much easier than others did.

The schools were also keen to take the group out on field trips. The group visited the famous Yuayan Gardens, where a group of Chinese performers played ancient Chinese instruments to them, the group even got to try these instruments. They also visited Taicang’s famous rose gardens, where they met a Turtle and saw some of China’s most beautiful natural plants and birds.

The school visits concluded with a farewell ceremony and a gift exchange, between staff and between the pupils from our School and the Chinese school. These gifts were a symbol of ongoing friendship and partnership between the 2 schools and we were very grateful to receive our gifts from both the schools we visited. During the ceremony pupils from all schools performed songs, dances and played instruments. SJP and SMCC even sung a rendition of Twinkle Twinkle Little Star, accompanied by 600 Chinese pupils.

Following their time in Taicang, the group travelled via Bullet train to Beijing, Chinas capital city. Beijing was a very busy city full of culture and history. The group visited lots of tourist locations in Beijing, and Lin was a brilliant guide showing us around her home city. We started the visit by travelling to a traditional Chinese market street which was followed by another wonderful banquet meal.

In Beijing the group also visited Tiananmen Square and the ancient forbidden city. This city was flooded with Chinese history and culture, and the group even got to see one of the famous warriors from the Terracotta army.

Then came the groups final day, and for may the highlight of the trip, as the final day was their visit to the Great Wall of China. They travelled by bus, and were met with the wall, which stretched out across miles of the Chinese hills and mountains, it was truly an incredibly sight and something that’s the pupils will remember for the rest of their lives. China really was a life changing experience for both the pupils and staff. They experienced things they never have experience before and go to visit one of the seven wonders of the world, a truly incredible experience.