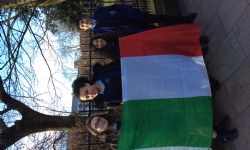 On Wednesday 7th February nineteen Year 9 students embarked on an Italian Taster Day at The University of Liverpool.

The day began with an introduction to studying languages at university and to Italian culture. This session culminated in a competitive game of Kahoot! against the other Merseyside schools taking part in the day. One of our teams came a close second in the first round of the competition but were delighted to come first overall at the end of the day!

The next session involved watching clips of subtitled Italian films which served as an introduction to the Italian language and pronunciation. The students were surprised by how much they could understand by using their knowledge of Spanish and English cognates.

Following our complimentary lunch in the university’s

Language Lounge, we were taken to a computer suite for an introduction to interpreting workshop. First of all, the students had to listen to recordings of vocabulary and record themselves repeating it back to practise their Italian pronunciation. Next, they had to act as an interpreter in an Italian restaurant and translate both the Italian and English sentences they were given. The second-year university student volunteers told our pupils that they had also completed the same exercises and they were impressed with how they were coping with the difficulty.

It was a great day for all involved and opened our students’ eyes to the opportunities available to them when learning languages and studying at university. We received a letter of thanks from the Italian department which states, “We were very impressed by the interested and mature behaviour of your students at such a young age.” Bravo anno 9!