A Trip to Shakespeare’s Stratford. 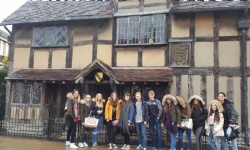 Last Tuesday a group of twelve students from Year 13, currently studying English Literature and exploring Shakespeare’s play King Lear, set out on a trip to Stratford-upon-Avon to visit the birthplace of Shakespeare - a town interlaced with his influence, inspired by his journey, his life and his works.

The students were first guided around the home of Joan Hart, the only sister of Shakespeare who survived childhood and actually outlived him, providing us with the only descendants of Shakespeare’s family who still live in Stratford-upon-Avon today. The students then walked through the birthplace of Shakespeare, viewing the pantry, kitchen area, and the upstairs bedroom which astoundingly retains the original flooring which Shakespeare would have walked on throughout his youth. The tour was ended with a live performance from actors who performed scenes from King Lear in the scenic gardens, in the rain, which perfectly paralleled the famous storm in the original play. After the tour, the students were allowed to wander the picturesque town before attending a private lecture on King Lear delivered by the Shakespeare Birthplace Company revolving around the context of the play and the presentation of the theme of power which is prevalent throughout the plot, giving them an essential insight and knowledge for their final exam.

In A Trip to Shakespeare’s Stratford.