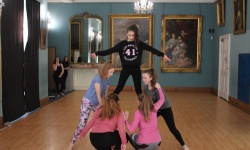 Forty kids, a four century year old house and lots of arts and crafts. What could possibly go wrong? Well, thanks to the fabulous staff and facilities of Ingestre Hall, Stafford, absolutely nothing as the students of both St. John Plessington and St. Mary’s Catholic College made full, creative use of the state-of-the-art facilities on offer for three days and two nights.

The fun began on Monday January 14th, with the bus leaving at 9:00 am sharp and arriving at just a little after 10:30 in the stunning Staffordshire countryside. The house dates back from the seventeenth century, with the sixth Earl of Shrewsbury who, along with Alton Towers in his property portfolio (pre-Corkscrew etc), employing Capability Brown as head gardner and Sir Christopher Wren to design the family church.

Both the gardens and the church have survived and act as a magnificent backdrop to inspire the non-stop flow of creativity during the coming tutorials, fun and games. There was little rest-bite following the journey either. After dropping bags into luxuriously appointed rooms offering panoramic views, it was down into the main hall to meet the tutors - Rich, Tara, Heather, Felix and Ollie - to learn precisely what it was that lay ahead for the Year 8 and 9 collegiate body.

Well, again, yes, thanks to the focus, drive, imagination and hard work of the students from both schools, not to mention the expertise of the tutors of all disciplines. The fabulous, plentiful, home cooked food helped out too of course. With so much constructive energy being burned, the need for fuel was paramount and Ingestre’s caterers certainly didn’t disappoint.

Up in art, Heather had her class of six were hard at it, interpreting their themes. Even in the early stages, the sparks of enthusiasm kindled the fires of productivity into a raging inferno, so that by day three all of the completed projects were not only jaw dropping for their school teachers, but also similarly praise inducing from their tutors.

Down in drama, Rich had his team of fifteen or so actors not only brainstorming ideas, but writing the script and developing themes at will so that by the time the performance was staged, the finished product had become a shining gem thanks to the determination of these potential Tony nominees who were not only working hard, they were having a ball in the process.

It wasn’t all hard work though. In between sessions there were to be plenty of breaks - and yet more food - during which table tennis, air hockey, bar football, musical instruments, pool and walking in the breathtaking grounds could all be, and were, thoroughly enjoyed. It’s amazing how a thirty thousand pound vintage piano can inspire budding Beethovens to tickle the ivories, or how twenty-seven acres of prime, manicured land can instil a love of nature.

On night one, the traditional quiz saw the fierce competitiveness of the arts rise to the surface, before the 3D version of JurassicWorldwas screened in the on-site cinema. Downstairs in the cellar, Ingestre boasts a fine, fitting tribute to WWI in the shape of its replica field hospital. Rich is the host of this particular attraction, with all of the students fully engaged, captivated and intrigued by the fascinating facts and interactive nature of the whole exhibition.

Into day two, after breakfast and under Ollie’s steady guidance, the musicians were busy laying down tracks, building their lyrics and polishing their chords so that by the time their performance times arrived - both recorded in the on-site studio and live - the two songs were delivered with drive and passion enough to satisfy the harshest of Glastonbury critics.

Following a hard day two, the students had chance too wind down for an hour before Disco fever gripped the baron’s homestead. Royalty may well have stayed at the hall in the past, but the royal standards of dancing to the beats coming from the fabulous sound system in the Cavern-esque ‘bar’ very nearly defies description. Most evident, though, was the exuberance, feel good nature and the bonds growing between the students of these two sister colleges.

For those less energetic -or, more likely, more curious - the campanologists of Ingestre church kindly invited two groups of five girls and five boys to attempt both hand bell ringing and, also, the main bells way up in the campanile itself. A once in a lifetime opportunity if ever there was one because even if some do turn to this medieval musical art form later in life, the chances of them performing in a tower designed by the man behind St.Paul’s Cathedral, it could be suggested, remain pretty small.

Chief ringer Lynne and her team of Andrew, Hannah, Mike and Phil were more than helpful, explaining the dos and don’t of bell ringing, which was greeted with two parts awe and one part fear as the ropes rebounded before each pair of eyes in turn. A fabulous experience and one that will be long talked about by those who took the opportunity.

In the dance studio, Tara had her charges leaping, rolling, tumbling and twisting to a soundtrack divided between two parts. The first, an emotionally moving piece surrounding the capture and despair of the overall themes of the sessions as a whole. The second, a pulsing, electrifying and vibrant representation of freedom that fair set the blood ablaze.

With the show cases completed, the suitcases packed and the last of the food consumed, it was time to say farewell to the gloriously appointed Performing Arts Centre of Ingestre Hall - the only such institution of its kind in the UK - until next year.

The short stay was undoubtedly a fabulous, fun-filled feast of educational, informative and inspirational delight that is sure to stay long in the minds not only of those students who participated, but also of those school staff fortunate enough to be able to look after them.

Thank you, Ingestre. It’s been a blast!