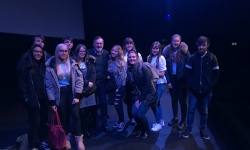 On Tuesday the 4th of February students from the Social Science department attended a Policing and Criminology Conference in Manchester. The day involved interactive lectures from famous figures in the field of Criminology including David Wilson and Jackie Malton.

David Wilson is one of the country’s leading criminologists and author of many books including ‘My Life with Murderers’, ‘British Serial Killing’, ‘Hunting Evil’ and ‘Pain and Retribution’. He is also the presenter of the award winning programme ‘Interview with a Murderer’ and ‘Crimes Files’. David Wilson started his career as a prison governor and later worked as a criminal profiler, assisted with police investigations and conducted interviews with serial killers. His experience and knowledge of the field captivated the students interest throughout the day.

David focused on the approaches to offender profiling, in particular, he discussed the case and reporting of the Ipswich Murderer. The day also involved the Senior Lecturer of Criminology, Emma Kelly, discussing the spree murderer Joanne Denehey, allowing students to consider whether criminals are born evil or made evil. Professor Graham Pike explored the miscarriages of Justice in the UK including a discussion on the use of DNA evidence in crimes and the unreliability of eye witness accounts.  In addition, Jackie Malton, Ex Detective Chief Inspector of the Metropolitan Police, shared her personal journey through the police force over the years and discussed how it has changed since the 1970s. Jackie is the role model of the award winning series Prime Suspect. In addition, students heard from James Treadwell who conducted undercover research on football hooligans in his PHD studies. Nowadays, James travels to prisons up and down the country to investigate how these institutions are not ‘crime free’ and are often misrepresented by the media. His published work includes ‘50 facts everyone should know about crime and punishment in Britain; The truth behind the myths’. He raised some very insightful questions on the purpose, role and functions of prisons in the UK today.

Lastly, David Wilson interviewed live on stage ‘Noel Razor Smith; the prolific armed bank robber who spent 32 years of his life in the prison system. Noel spoke about the contributing factors which led him into crime, the failure and cruelty of the criminal justice system during his time in prison,  the success of rehabilitative programmes and his positive contributions to society since leaving prison. Throughout the day our students showed the upmost respect, maturity, and dignity. Every student engaged positively with the content and left with an inquisitive mind to discuss the events of the day. In their discussion they showed just how mature and thoughtful they are; well rounded members of our society.

Thank you to all of the students who attended the trip.

In Criminology and Policing Conference