Vincent was born on 24th April 1581 into a poor peasant family near Ranquine, Gascony near Dax, southwest France. Vincent was a very intelligent young man. He spent four years with the Franciscan Friars where he received his education. He began his divinity studies in 1596 at the University of Toulouse. He was ordained a priest at the age of twenty.

Captured by Turkish pirates, he was taken to Tunis and was sold into slavery. He was freed in 1607 after converting one of his owners to Christianity.

He returned to France and became parish priest near Paris where he started an organisation to help the poor.  His work also included nursing the the sick and helping find jobs for the unemployed. He spent the rest of his life taking care of the poor and abandoned. He died on 27th September 1660 in Paris.

"Compassionate God, open our hearts, unclench our hands, free our lips, unblock our ears, open our eyes, enable us to see your face in all who we meet today." 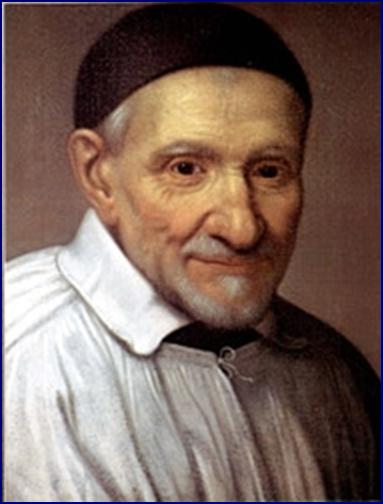