Bernadette was born in Lourdes, France. Her parents were very poor and she herself was in poor health. One Thursday, February 11, 1858, when she was sent with her younger sister and a friend to gather firewood, a very beautiful Lady appeared to her above a rose bush in a grotto called Massabielle.  The beautiful Lady was the Blessed Virgin Mary. She appeared to Bernadette seventeen other times and spoke with her. She told Bernadette that she should pray for sinners, do penance and have a chapel built there in her honour. Many people did not believe Bernadette when she spoke of her vision. She had to suffer much. But one day Our Lady told Bernadette to dig in the mud.

As she did, a spring of water began to flow. The next day it continued to grow larger and larger. Many miracles happened when people began to use this water. When Bernadette was older, she became a nun. She was always very humble. More than anything else, she desired not to be praised. Once a nun asked her if she had temptations of pride because she was favoured by the Blessed Mother. "How can I?" she answered quickly. "The Blessed Virgin chose me only because I was the most ignorant." Bernadette died on 16th April 1879

"I shall spend every moment loving. One who loves does not notice her trials; or perhaps more accurately, she is able to love them." 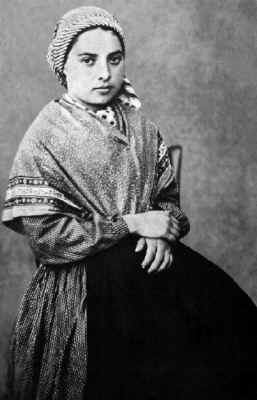